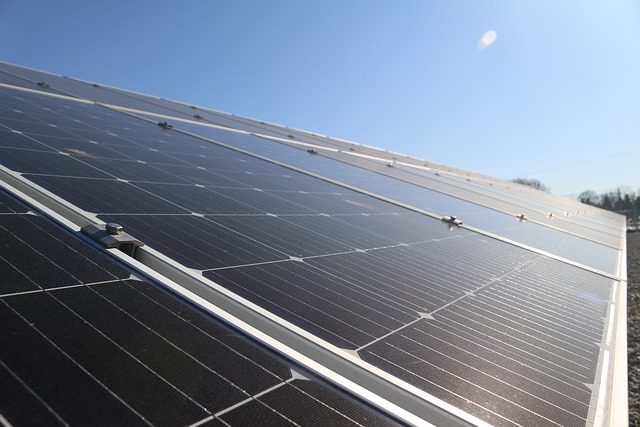 About 18,000 solar panels blanket a vast field in the town of Shibayama, Chiba Prefecture, about 5 kilometers southeast of Narita Airport. If you look closely, you can see white dots here and there on the panels.

“They’re bird droppings. If not cleaned up, the stuff will accumulate and cause hot spots,” said Masafumi Oshiro, general manager of the investment management department of SBS Asset Management Co., a logistics facility development company based in Tokyo’s Sumida Ward that operates this mega-solar plant.

“Hot spots” here refers to when bird droppings, fallen leaves and other factors cause increased electrical resistance in solar panels, resulting in heat. Not only does this reduce power generation efficiency, but it can also lead to panel failure and fires.

Bird droppings dot some of the solar panels in Shibayama, Chiba Prefecture, on July 15, 2021. If not cleaned off, the droppings can lead to decreased power generation efficiency and panel failure. (Mainichi/Ei Okada)

This power plant went online in 2013, and according to Oshiro, hot spots, rust and dirt became noticeable from around the fifth year of operation. An examination of the plant’s output found that its power generation efficiency — the amount of electricity generated per quantity of solar radiation — had dropped about 10% by 2019, the plant’s seventh year. That amounted to more than 10 million yen (about $89,920) in lost electricity sales revenue per year.

The government’s goal is to reduce greenhouse gas emissions by 46% by fiscal 2030 compared to fiscal 2013 levels. The Ministry of the Environment has announced a proposal to add 20 million kilowatts to the current target of 64 million kilowatts of solar generating capacity in fiscal 2030.

With the introduction of the feed-in tariff (FIT) system in 2012, the construction of mega-solar power plants took off in many areas, but the pace has stalled since. The number of suitable sites for …….