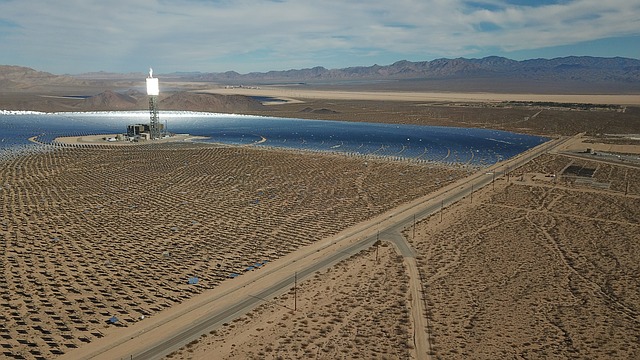 It seems unlikely that oil and salt can be connected to power generation, yet these are important elements in Solar thermal power plants. A special thermal oil is used to absorb the Solar radiation that is collected with the help of mirrors, convert it into heat and send it (through pipelines) to a storage unit or a steam turbine, to make electricity. Those storage units are filled with molten salt, capable of maintaining the high temperature. So, the oil is used as a heat transfer medium, and the salt acts as a heat storage medium.

The only problem is that some energy is lost when the heat is transferred from the oil to the salt, and that the oil’s operating temperature has limitations, which also limits the energy conversion. Basically, researchers are looking for ways to increase temperatures in these Solar thermal power plants, and DLR is doing it by eliminating the oil and using salt not only for storage, but also for transfer.

The High Performance Solar 2 (HPS2) project, funded by the German Government, began in 2016. The DLR Institute of Solar Research, in collaboration with the University of Évora and industry partners from Germany and Spain, built a Solar parabolic trough test facility, in Portugal.

DLR announced that the test facility, using molten salt as a transfer agent, has just started operating. According to project representatives, power plants using this technology will be easier to build, more efficient, and will reduce electricity production costs by 10%.

The only problem with salt is the risk of solidifying during the heat transfer, which is why all the pipelines in the circuit need to be heated. Other than that, the project’s engineers are working on gradually increasing the operating temperature, from 300 degrees Celsius (572 degrees Fahrenheit) to 500 degrees (932 degrees). The facility’s collector modules, filled with salt, are currently producing 3.5 MW. The salt that’s used is a ternary, not a binary mixture, because of its lower melting temperature.